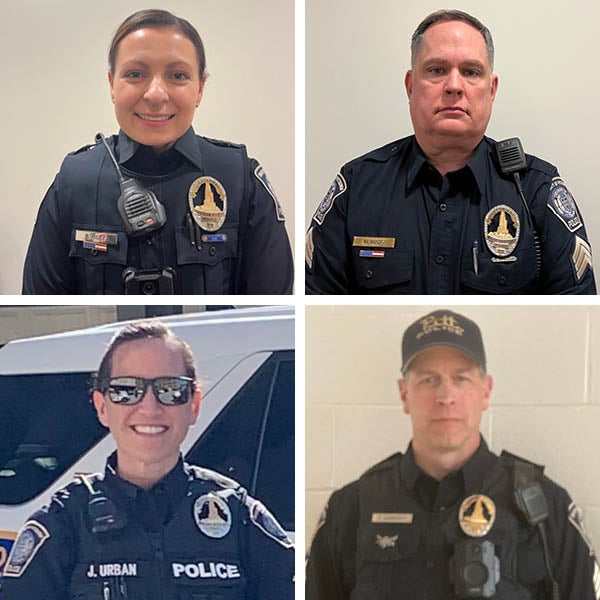 The University of Pittsburgh Police Department continues to strengthen its ranks and announced four promotions, which took effect on April 3.

“I believe we are very fortunate to have such high-caliber personnel in our department," Deputy Chief Holly Lamb said. "These four individuals will bring integrity, a great work ethic and leadership abilities to their new positions. These values will serve as examples for everyone, which will make the department much better as a whole.”

The four officers will be assigned a shift and supervisory role, said Deputy Chief Lamb.

Lt. Riley, who joined the department in 2013, has spent the last three years as supervisor for the Community Programs Unit, which provides outreach to the campus community. She also oversees the Citizens Police Academy — which gives members of the Pitt community an opportunity to learn more about being a police officer — and the department's internship program. Lt. Riley also serves as an instructor in Defensive Tactics, Active Killer training and Field Training.

In her role as Community Programs supervisor, Lt. Riley said her interactions with the Pitt and Oakland communities allowed her to grow as an officer.

"I was able to engage in critical conversations with different community stakeholders, which gave me new perspectives on their concerns, whether it be pedestrian safety issues, noise complaints or diversity initiatives," she said. "I also have enjoyed instructing for Pitt Police's Citizens Police Academy. The participants always ask great questions and their commitment to the program is valued."

While her role with the Community Programs Unit will come to an end, Lt. Riley said her work connecting with the public will continue.

"As I transition to my new role as shift Lieutenant, I am excited to connect with people on patrol in a different capacity," she said. "I am proud to work in a department that has great officers, guards, and communication specialists who protect and serve the Pitt and Oakland community."

Lt. Mock joined the department in 2005 and has overseen the emergency dispatchers and implementation of the Emergency Notification Service (ENS) and the Rave Guardian mobile app. He also assists in compiling the data used to ensure the University is in compliance with the federal Clery Act, which requires that schools report campus crime data, support victims of violence, and publicly outline the policies and procedures they have put into place to improve campus safety.

"During my 17-year career with the University of Pittsburgh Police Department I have been fortunate to work with an amazing group of supportive colleagues," said Lt. Mock. "I would like to thank my co-workers who have challenged me to my best each day. To my past and present supervisors, I thank you for your leadership and encouragement. Being promoted to lieutenant is an amazing opportunity. I look forward to new challenges and am excited about the opportunities that lie ahead. With the love and support of my family, I am eager to take this next step in my law enforcement career."

For Sgt. Urban, a member of the motorcycle unit who's spent seven years with the department, the promotion to a leadership role "means a great deal to myself, as well as my family, friends, and co-workers, who have been a huge support team to me.

"This new position will be challenging and rewarding and I’m looking forward to continuing to grow within my profession as a law enforcement officer."

Sgt. Dubrosky's 20 years with the Pitt Police department were spent in a number of roles. He's a member of the department's Specialized Emergency Response Team, serves as a field training officer and firearms instructor, and he is an instructor in the Active Killer program, which provides guidance on situational awareness and reaction to a real-time campus crisis.

"The promotion to Sergeant means a great deal to me both personally and professionally," he said. "The bond I have formed with my co-workers is unrivaled. We are a family. The Pitt Police Department has shaped me into the officer I am and a role model for my son, who also chose law enforcement.  I always try to treat the students on campus and residents within our community as I would want someone to treat my family member."

As per department policy, all officers have four-year college degrees.

Sgt. Urban, who has a history degree from Saint Vincent College in Latrobe, Pa., is the coordinator for the department's participation in the Special Olympics. Additionally, she oversees the Physical Fitness/Officer Wellness Program, is a member of the Honor Guard, and serves as a Field Training Officer.

Sgt. Dubrosky, who graduated from Coastal Carolina University near Myrtle Beach, S.C., with a degree in political science, said the Pitt Police Department "has stayed consistent with the training and guidance we need in order to be the best police officers and have the tools needed to successfully operate."

Lts. Mock and Riley are protecting a campus they once attended as students. Lt. Mock earned his degree in criminal justice from Pitt, while Lt. Riley, who earned her undergraduate degree in Criminology & Investigations from West Virginia University, later received a master's degree from Pitt's Graduate School of Public and International Affairs.

"During my time at Pitt, I have been grateful for the learning and training opportunities," Lt. Riley said. "Pitt Police has invested in me through internal and external trainings that have helped me grow as a law enforcement professional. Working at the University, I was also able to earn my master's degree through GSPIA. I appreciated the experience of being a Pitt student."